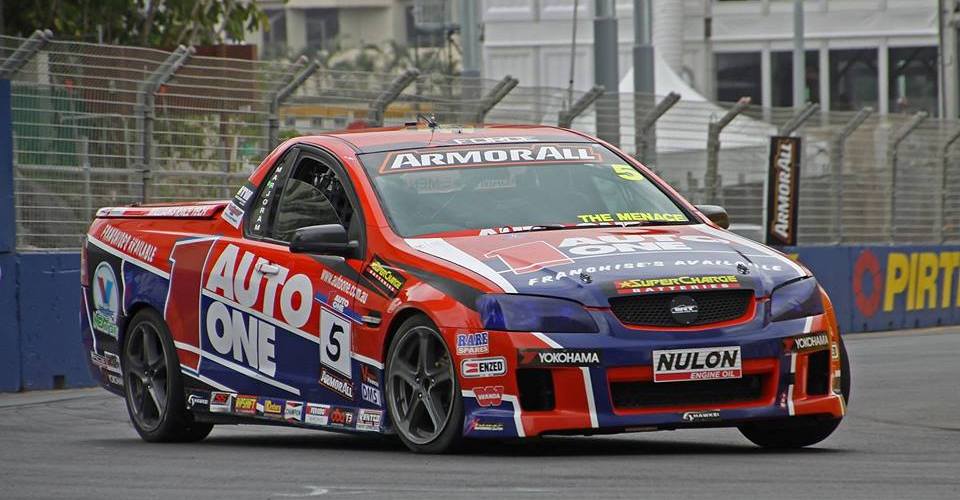 V8 Utes has a strong place in the heart of Australian motorsport and 20 year old Adam Marjoram is set to make his 2014 racing campaign stronger than ever.

While studying a double degree of Economics and Commerce and racing all over Australia, this year is set to be a challenging and exciting year for the Western Australian.

The V8 Ute driver recently caught up with Fiasco Sports’ journalist Loren Hazelwood to talk about his exciting up-coming season.

Loren: You had a great debut season in the V8 Ute series last year, how will this help your 2014 campaign?

Adam: Yeah, it was a great year learning all the tracks and handle the V8 Utes – they’re very different to any other form of race car! For 2014, I have signed with the Erebus V8 Ute team and the Erebus Academy. With the resources and access to all areas with Erebus, it will help me to develop as a driver on and off the track and provide me with a really competitive car. Hopefully we can push the top 5 consistently!

Loren: Now you just mentioned that Erebus Motorsport have signed you as a ute driver, will their experience in V8 Supercars be beneficial for your second season in V8 Utes?

Adam: For sure, Erebus are an extremely professional outfit and many of the things they have learned in V8 Supercars can be transferred to the V8 Ute team, whether it be technical or PR related.

Loren: You started out your racing career in sprint kart racing all over Australia, how has this helped in getting yourself to the level you are at today?

Adam: Karting is a great base for any young driver. It allows you to learn the fundamentals of racing and race craft. Transitioning into car racing is a hard process, however, the one thing you never lose is that race craft. Coming from Perth, you are very isolated; therefore you really have to travel abroad to race where the competition is. Because of this I was always learning new tracks; this really develops the adaptability of the driver so that when they are immersed into a new environment they can pick it up as quick as possible.

Loren: What has the V8 Ute experience been like?

Adam: It has been amazing! To only be in the car racing scene for two years and getting the chance to race at places like Bathurst, Surfers Paradise and in front of my home crowd at Barbagallo [Perth], has been amazing. I have learned so much about racing over the 2013 season…the tracks, the cars, the media. It has just been a dream come true for me! When I go to the track I am honestly like a kid in a candy shop, there is nowhere else I’d rather be!

Loren: You unfortunately had a massive crash last year at the Gold Coast 500 and had to replace the car for the final round at Sydney, how did you take that challenge of overcoming a crash and coming to grips with a new car?

Adam: Yeah, that was definitely the biggest crash I had been in. You race knowing that accidents like that happen, but you just never expect it to happen to you. I felt pretty sore after the crash as you’d expect, but went straight into exams so I couldn’t see anyone about it! I have since seen a physio, and all is well now. But I was very lucky to get another V8 Ute for the Sydney 500. Unfortunately we were plagued with problems from chronic understeer to overheating engines. That dropped us three positions in the Championship and down to third in the Rookie of the Year Championship which was not ideal.

Loren: You’ve been busy juggling university studies and racing, do you have anything else planned for 2014?

Adam: Yeah, has been a busy, busy year! As part of the Erebus Academy I will be travelling to more V8 Supercar rounds outside of the V8 Ute calendar to learn and help the team. Otherwise, I am looking at getting back into a kart back here in Perth to keep my eye in a little more and keep up the training so that I am at my physical peak whenever I jump into a car! There also may be a couple of cool little things pop up during the year …you’ll have to keep posted.

Loren: The team here at Fiasco Sports will definitely be watching you this year! Is there anyone you would like to thank?

Adam: Thanks! Look everyone that has been instrumental in forging my Motorsport Career has been amazing, namely the support from Auto One, Valvoline, Supercharge Batteries, Nova, my team last year – Williams Race Tech – and and my new team, Erebus Motorsport.

Loren: Thank you very much Adam, catch you on the track!