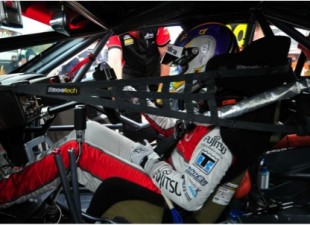 As Bathurst celebrates its 50th anniversary at Mt Panorama this weekend, one of Australia’s best young drivers is set to make his debut.

V8 Supercar fans will be treated to cars whizzing past at more than 300km/h over 161 gruelling laps, in a circuit promising to challenge drivers regardless of their experience.

I recently caught up with Scott and asked him about Bathurst and his promising motor racing career.

Loren: So with you currently leading the championship in the Dunlop Development Series and having a successful run at Sandown the other weekend, what are your thoughts and feelings co-driving at Bathurst?

Scott: It’s going to be pretty cool. There is a bit of pressure on me, but the team has hired me to do the job because they believe in my ability and I am looking forward to my first Bathurst!

Loren: As you would be! Considering you are only 19, it is a great achievement and shows you have what it takes to tackle the mountain. But in saying that, with Mt Panorama being one of the most daring racing circuits in Australia, are there any parts of the circuit you are concerned about?

Scott: Definitely the chase; it’s so fast and (it) takes you a few laps really to get up to speed through there, (but) considering it’s 300kph I don’t think I’m the only driver working up to that part of the circuit!

Loren: I can definitely see what you mean! It takes great skill and courage to be able to reach such high speeds. I am sure Jonathon has been helping you out and giving you his advice – what are his tips for you over the weekend?

Scott: Just go out and enjoy it. He knows it’s a big weekend for me and my family, so just enjoy the moment, bring the car back straight and see where we end up.

Loren: Sounds like a pretty good plan, I’m sure your family is very excited also! Seeing that this Bathurst is also the 50th anniversary of racing at the mountain, I’m sure growing up as a kid you watched every race. What message would you send to other up-and-coming kids dreaming of one day racing at Bathurst?

Loren: I know the Australian and New Zealand racing world is very proud of what you have achieved and can’t wait to see what you bring for the future. What will we see you doing next after Bathurst this weekend?

Scott: I’ll be off to New Zealand in a couple of weeks’ time with Jonathan for round 2 of the Enduro Championships of the V8 Supertourer series, which will great fun!

Loren: Sounds great, you’ll be back on home soil! I’ve noticed you’ve previously raced in the series –  what is the V8 Supertourers like compared to the Australian V8 Supercars Championship?

Scott: It obviously hasn’t got as bigger following as the V8 Supercars, but is doing pretty well in New Zealand; they are great cars, which can create great racing which is awesome.

Loren: Great racing is what it is all about. With you previously racing categories like go-karts, the Australian Mini Championship and Formula Ford, what did you find the most challenging and exciting?

Scott: Go-karts really I did more of. It was really tough and competitive and (I) had some really good battles over the years!

Loren: Go-karts are the stepping stone for car racing, that’s for sure. Well it was a pleasure talking with you once again, all the best for the Bathurst 1000 this weekend! I will be watching the race at home and cheering you on!

Scott: Thank you and talk soon!