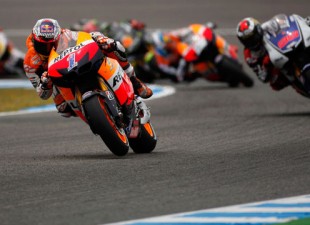 Australian Casey Stoner has taken out his first race win for this year’s season, winning at the Spanish Grand Prix in Jerez, in a race Stoner called one of the greatest of his career.

The win left Stoner only four points shy of Lorenzo’s championship lead; however, the race although wasn’t an easy win for Stoner.

The current world champion started from a challenging fifth position and from the very beginning, was involved in a fantastic battle for the race lead.

The Repsol Team Honda lead majority of the laps of the Brazilian Grand Prix, but Jorge Lorenzo was on charge in second place.

With nine laps to go, Lorenzo started battling Stoner for the race victory, only to try and pass the Australian with three laps to go into first corner.

It was there Lorenzo lost ground, handing the Brazilian Grand Prix victory to Stoner.

After the race, the victorious Stoner said his Honda bike was set up for the wet circuit, but on the clearing dry track, the lack of rear-tire grip made the Honda very hard to ride.

The win at the Brazilian Grand Prix looks to be the beginning of Stoner’s 34th Moto GP victory, with the Australian looking on the money to take victory for this year’s season.