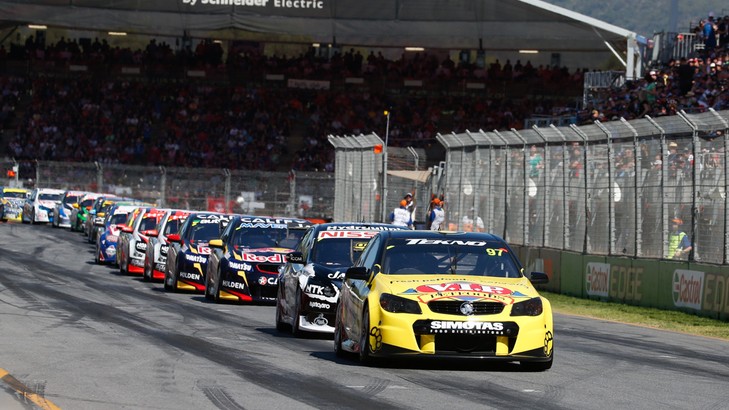 The world of Twitter has reacted to the new safety car restart ruling, which caused Jason Bright’s VF Commodore to roll at the Clipsal 500 Adelaide.

New rules were introduced to the Australian V8 Supercars 2014 season and with it controversy between drivers, teams and supporters.

During Race 2 at Round 1 of the championship held at the demanding Clipsal 500 Adelaide circuit, a crash causing a safety car unleashed the new restart format, which saw Jason Bright roll through the Turn 1 centre chicane, and Shane van Gisbergen and Rick Kelly both penalised for jumping the start.

The new rule has caused controversy throughout the field, with drivers, teams and fans having their say on the social media network, Twitter.

Even Formula 1 Champion Jenson Button had his say, with V8 drivers Lee Holdsworth and Will Davison joining into the conversation…

The new rule states that drivers cannot exceed 60km/h in the first Acceleration Zone (AZ), therefore all drivers behind the leader have to maintain the speed of 60km/h, controlled by the leader, and cars cannot accelerate until they have passed the final AZ board.

V8 Supercars’ decision to introduce the AZ acceleration zones at restarts was recommended and approved by the V8 Supercar Commission for the 2014 season.

If you would like to have your say about the new safety car restarts and the introduction of the AZ acceleration zones, use the hashtag #V8SC.