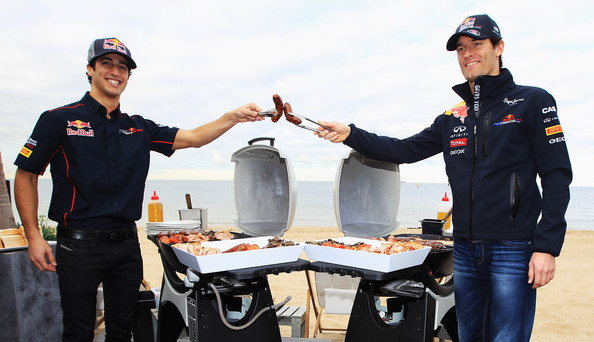 Well, another season of Formula 1 is done and dusted, with the time now coming to say goodbye to our Aussie mate, Mark Webber.

And what a great finale at Brazil. Webber got an OK start (for him…) before carving through the field, making outstanding passes on Lewis Hamilton and one of his best mates Fernando Alonso, proving to me that he still has it – even at his last race. Watching him just made me realise this was going to be the last time we were going to see old mate Webber on the track in a Formula 1 car.

Webber had a fantastic career, showing us Australians that he could do it and by hell – he has made us proud. It was just fantastic to see him holding the Aussie flag on the podium in Brazil and I’m sure he will be doing our country just as proud while racing for Porsche next year.

Before all of the fame and fast race cars, Webber took the gamble to go from racing Formula Fords in Australia to trying his hand in Europe. Along the way he made it look possible that even without a lot of money, you could still make it to the pinnacle of motor racing.

And thank God he did. With Webber departing from Red Bull Racing and ditching his rival Sebastian Vettel, our fresh new Aussie talent Daniel Ricciardo gets his chance. Stepping up from the Toro Rosso Formula 1 team to Red Bull Racing, he gets his show with arguably the strongest team in the series, period.

Ricciardo of course will have a tonne of pressure next year, but the young Aussie knows he can do it. Moreover, the blonde German won’t threaten him, something which is slightly hard to imagine considering his teammate is a four times world champion.

So Mark, you have done Australia proud over the years. From your first Grand Prix in Australia, to finishing on the podium in your final race, we have been lucky to have someone like yourself. You demonstrated to the world what true Aussie grit really is. Thankyou, you’ve been a blast to watch.

Now c’mon Dan, show this German how it is done.