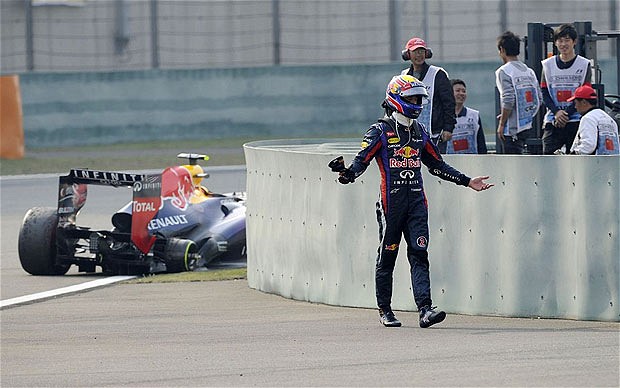 Who thought you could get through a race and take the win with more racing and less bitching? Believe it or not, team orders were not put in place by any teams at the Chinese Grand Prix, with Ferrari’s Fernando Alonso driving away with the win.

Despite clever pit-strategy from Ferrari, Alonso grabbed the race lead from pole sitter Lewis Hamilton early on in the race and did not look back.

The race was full of wheel-to-wheel action, right from the start to finish. The front row of the grid saw Mercedes driver Lewis Hamilton gain the race lead, getting a great jump on Raikkonen who was on second.

It didn’t take long though to see the drama unfold as merely five laps in saw the race’s first two retirements, with Esteban Gutierrez slamming the rear of Adrian Sutil’s Force India at the end of the back straight.

It only escalated from here with Webber trying to make his way from the rear of the grid to the front but instead bumped into his sister team-mate Jean-Eric Vergne.

Unfortunately for Aussie Webber, his race ended a short time later as the new left-rear wheel, which had not been properly fitted at the pit- stop fell off, making the Australian come to a stop.

Perez and Raikkonen came together, with Raikkonen hitting the rear of Perez’s McLaren. No penalty was dealt although Kimi would have had cold feet due to the slightly damaged nose of his car.

As the incidents stopped occurring, the race went on and Ferrari was still out in front. Like the leading trio, Vettel completed three stops before hunting down the final podium place-getters in the final five laps.

English driver Jenson Button led a large portion of the race thanks to a two-stop strategy, but was unable to fight to the finish.

Fernado Alonso took his first win for the season, with Raikkonen placing himself nicely in second, with Lewis Hamilton rounding out the top three.

Sebastian Vettel and Jenson Button took fourth and fifth after running the alternate strategy of using the option tyre in the final stint.

After the Chinese Grand Prix, the championship sees Vettel lead by three points to Kimi Raikkonen, with Fernado Alonso now third in the standings.