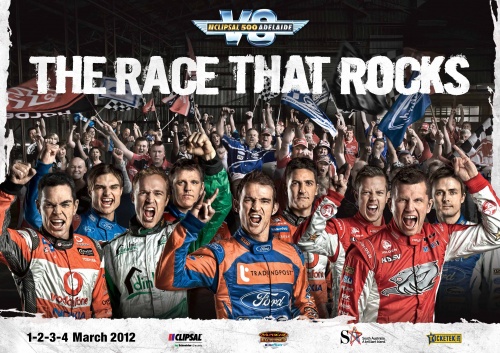 Ford Performance Racing’s Will Davison and Mark Winterbottom finished first and second place at the opening round of the championship at the all popular South Australian event Clipsal 500, held at Adelaide’s intrepid street circuit.

Davison was very unfortunate during Saturday’s race, running low on fuel while in first position on the final lap, causing him to drive ‘conservatively’.

Davison then came in second, handing the win over to Jamie Whincup with just six corners to go.

Mark Winterbottom also suffered the same issue, but called into the pits with just one lap to go to refuel.

This time it was triple eight’s Jamie Whincup who suffered from a slight engineering error with the fuel mapping, which caused him to hand over the race lead to Holden Racing Team’s Garth Tander.

As the race continued, the Ford Performance Racing team mates became the fastest cars on the circuit.

In the second stint of the race, Davison passed Tander to take the lead for the final Sunday race, with team mate Winterbottom also taking advantage of Davison’s passing manoeuvre on Tander, slipping into second position.

Later in the race, Ford’s two FG Falcons led the race with, for the first time ever on Adelaide’s street circuit, no safety cars interfering with the final race of the Clipsal 500.

Will Davison currently leads the V8 Supercar’s driving championship by 18 points to Holden’s Jamie Whincup, with the next round being held at the Formula 1 Australian Grand Prix, at Albert Park in Melbourne.